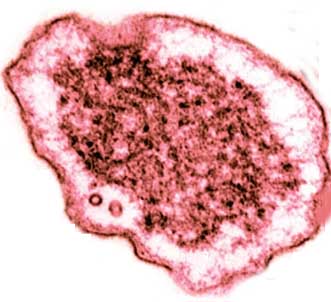 Nipah virus is classed as an airborne high consequence infectious disease (HCID) in England and clinical assessment should be performed by specialist hospital staff, with adherence to strict infection prevention and control precautions (see below) to prevent secondary transmission.

Transmission
The 1998 Malaysian outbreak occurred following a spill-over event, whereby Nipah virus from bats spread to pigs, with subsequent transmission occurring between pigs, followed by transmission to humans exposed to the infected urine and/or respiratory secretions of infected pigs. Other outbreaks have been associated with consumption or collection of foodstuffs, such as raw or partially fermented date palm sap, which were contaminated with bat saliva and/or excreta containing Nipah virus.

Human-to-human transmission also occurs, although the relative contribution of this mode of transmission has varied considerably between outbreaks. Close and direct, unprotected contact with infected patients, especially those with respiratory symptoms, has been implicated as a transmission risk.

Both human-to-human and horse-to-human transmission (slaughtering horses or consuming infected horse meat) were identified in the Philippines outbreak in 2014. There is evidence that Nipah virus can infect other animals, including dogs, cats, goats and sheep.

Complications
The most important complication of Nipah virus infection is encephalitis, which is associated with a high mortality rate; however, the full spectrum of clinical illness is not completely understood. The incubation period is thought usually to be 4 to 14 days, although a period as long as 45 days has been reported.

Typically patients present with a sudden onset, non-specific flu-like or febrile illness, sometimes with gastrointestinal symptoms. Pneumonia and other respiratory manifestations have also been described as a feature, but their onset appears to be variable. These are typically in addition to other signs and symptoms and vary in frequency according to the outbreak (29% in Malaysia; 75% in Bangladesh).

In many of the patients in reported series, symptoms and signs of encephalitis and/or meningitis developed after 3-14 days of initial illness. Cerebrospinal fluid abnormalities are similar to those seen in other acute viral CNS infections. Magnetic resonance imaging of the brain may reveal multiple small subcortical and deep white matter lesions, without surrounding oedema, but these abnormalities may be seen in other acute CNS infections.

Rapid progression to critical illness is said to occur in approximately 60% patients. Mortality has also varied between outbreaks but is high overall (40 to 75%). Neurological sequelae may occur in survivors, including relapsing encephalitis with delayed reactivation of latent virus infection.

Treatment
There is no proven, specific treatment for Nipah virus infection, and there is no preventative vaccine; treatment is supportive.

Patients have received ribavirin in previous outbreaks, but it was not possible to determine a beneficial effect of treatment. Ribavirin was ineffective in small animal models, as was chloroquine. Several experimental therapies are in pre-clinical development or phase 1 clinical trials, including monoclonal antibodies, fusion inhibitors, and novel antivirals.

If you want more information, you can ask our colleagues from the live chat or you can write to us at [email protected]